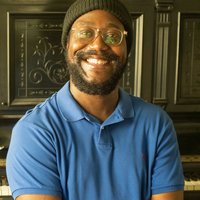 Jameel “Jproof” Roberts, the son of Jamaican and Antiguan emigrants, is a multi-talented platinum-selling producer, songwriter, composer/arranger, educator, and instrumentalist. A deep heritage of Calypso, Soca, and Reggae were the catalysts for what would birth a one-of-a-kind voice.

Jameel’s love for harmony and the craft of composing inspire him to routinely create and perform music for an ever-expanding range of settings. Having been thoroughly immersed in jazz tradition, Baptist Gospel liturgy, Hip-Hop, R&B, and other influences, Jameel has developed a signature sound that has been celebrated both nationally and abroad.

Recently, his songwriting and arranging were featured on the 2020 Grammy® nominated Album of The Year, Thank U, Next by Ariana Grande. The platinum-selling single "Imagine", finds the pop star dreaming of a life that could have been. A life with a “beautiful love that is now (and forever) unattainable". Roberts’ vintage synthesizers lay the groundwork for the daydream, while his string arrangement drives the song’s ending over the bed of his thumping acoustic piano. In addition, his other contributions to the album "Fake Smile" and "In My Head”, offer a blend of sample-based Hip-hop and R&B with Grande’s pop sensibilities.

A multi-time Grammy® nominee, Jameel also co-produced and wrote “Good Kisser” for R&B singing sensation Usher, garnering his first nomination for Best R&B song at the 2015 Grammy® Awards. Lauded as “a love song that tows the line between ’60s pop innocence and slightly naughtier, early ’90s R&B fare a la Bell Biv DeVoe.”, the song climbed to #1 on the US R&B/Hip-Hop Airplay charts.

Ever the versatile collaborator, his distinct musical voice is evident in numerous performance settings. Whether performing and touring on saxophone with the Village Vanguard Jazz Orchestra or rap legend LL Cool J, his relational understanding of musical genres allows his voice the license to steadily produce innovative music.

Roberts, a voting member of The Recording Academy, is also the recipient of an ASCAP's Rhythm & Soul Music Award. A member of the International Society of Jazz Arrangers & Composers, his music is published through Sony Music Publishing.