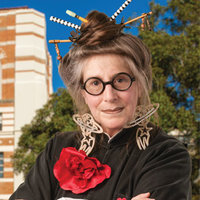 Shelley, a writer, astronomical historian and lecturer, is also an award winning performer, photographer, and currently the Session Director on the Mt. Wilson Observatory 60-inch Telescope. The International Astronomical Union recently named Asteroid 10028 BONUS after Shelley, for her work in astronomy education and outreach, and she is the recipient of a NASA Group Achievement Award. She has written special material for Lily Tomlin, and played a libidinous French woman in the Melvin Van Peebles film, Confessions of a Ex-Dufus-Itchyfooted Mutha,which premiered in the 2008 Tribeca Film Festival. Shelley also ran the SMCC planetarium for several years, and created the Janet Planet Planetarium Show and the Blast Off With Space E. Tracy Show. As an artist and Renaissance woman, Shelley has been educating UCLA Extension Students since 1989 in everything from Astronomy and Stand-Up Comedy, to the art of giving professional presentations and writing for Landscape Architects.
Instructor Schedule
Your Stories Told Live
Summer 2022
Cosmology, Astronomy, and Space Exploration in the News
Summer 2022