Celebrating a lifelong commitment to learn and grow

Nearly 2,000 students received certificates in one of UCLA Extension’s more than 100 certificate programs. 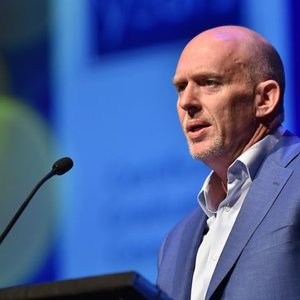 Speaking before a packed Royce Hall at the UCLA Extension Certificate Graduation Ceremony, Frank Pearce, co-founder and chief product officer of leading video game company Blizzard Entertainment, recalled the time that he felt the identity of his company was in flux.

“We launched a game called ‘World of Warcraft’ in 2004,” he told the graduates during his keynote address on June 22. “The success of this game created incredible growth in our employee community... We soon realized that the number of new employees placed the company identity at risk.”

So, Blizzard leadership held an exercise to define their mission and values. After that, “We did what any typical company would do: We cast them in bronze and embedded them in concrete at the base of a 12-foot statue of an orc riding a wolf,” he said, to chuckles from the audience.

Pearce received his bachelor’s degree in computer science and engineering from UCLA in 1990, and currently serves on the university’s computer science undergraduate advisory board. In 2007, he attended UCLA Extension’s Technical Management Program, a one-week intensive workshop that trains engineers and programmers in management and leadership skills. Since then, some 150 Blizzard employees have completed the program.

“Today completes just a single phase of your continued education,” said Pearce, who also received the Professional Achievement Award from UCLA Extension Dean Wayne Smutz. “The world is changing rapidly. We can’t expect that the things we know today are good enough to serve us forever. We must keep building on our knowledge and experience constantly in order to have success. Continue your journey to develop yourself. Make it a lifelong commitment to learn and grow.”

This year — during which UCLA Extension is celebrating its 100th year — approximately 2,000 students received their certificates in one of UCLA Extension’s more than 100 certificate programs, in fields such as early childhood education, accounting, feature film writing and information technology management.

Several graduates who attended the ceremony had very clear ideas about how a UCLA Extension certificate figured into their career plans. Amy Levier, who works in a downtown Los Angeles legal office, appreciated that she could attend classes for her paralegal certificate at Extension’s downtown location.

“I wanted to progress and expand my position there,” Levier said. “I had coworkers who had taken the UCLA program. We had a lot of different instructors who worked in different parts of the legal sector — we had paralegals, we had attorneys, we had people who worked for the city, we had people in private practice. We really learned the breadth of the legal profession.”

John Sabzerou, who earned a certificate online in supply chain management, hopes to use that credential, along with his 38 years of experience in manufacturing to launch a consulting business. “A certificate from UCLA, such a well-known name, will help me do that,” he said.

Nicole Nequinto, who earned a certificate in producing, said that she hopes the credential will help her break into the film business. “I wanted a program that would give the basics of the film industry, and also the benefits of being able to intern,” Nequinto said. “That opportunity alone gave me such a strength of knowledge. I also learned about parts of the industry I’d never thought about, specifically distribution. Just seeing how all the little cogs work together was very cool.”

Mauricio Valdez came from Peru on student visa to earn his certificate in directing. “The thesis was a film, and that was nice because we had to create a screenplay and shoot a film,” Valdez said. “That’s going to help us a lot in our future.”