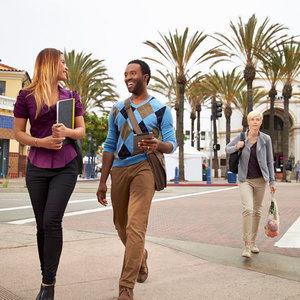 UCLA is located in Westwood Village, a vibrant, unique community in West Los Angeles. On a typical day, you can find college students, professionals, residents, and tourists wandering Westwoods’ collection of stores, restaurants, and theaters. The weekends attract Angelenos from across the city for dining or entertainment.

Southern California is a land of contrasts, with sunny beaches, wild-west deserts, lush gardens, and snow-capped mountains. Well-known for Hollywood and the film industry, Los Angeles is also a hub for international business, fashion, design, and culture, including museums, concert halls, and live theater.

Angelenos, as we call those local to LA, represent a wide variety of cultures and traditions; featuring large communities of Armenians, Chinese, Iranians, Japanese, Koreans, Latin Americans, Russians, Thais, and other ethnic groups. LA is also a starting point for sightseeing and excursions to San Diego, Santa Barbara, Las Vegas, and the Grand Canyon.

Santa Monica, a well-known beach community, has a 22-mile-long bicycle path where you can bicycle, inline skate, jog, and walk. You can walk to many popular attractions on the famous Third Street Promenade, or enjoy games and entertainment on the Santa Monica Pier.

Venice Beach is legendary for its colorful life. Artists, musicians, writers, and bodybuilders enjoy the freedom of the ocean, sand, and sun, and visitors stroll along the Venice boardwalk on weekend afternoons to sightsee.

Malibu, north of Santa Monica on the Pacific coast, is home to many Hollywood celebrities. Malibu offers numerous seafood restaurants, and swimming and surfing beaches.

The birthplace of the movie industry, Hollywood is only about 30 minutes away from UCLA.

The Hollywood Boulevard Walk of Fame, the famous Chinese Theater, the Hollywood Wax Museum, and Paramount Studios are just a few of the many attractions.