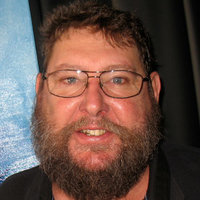 MFA, whose stories have been published in ZZZYVYA, New England Review, Tin House, Black Clock, and ten fiction anthologies including the 2016 California Prose Directory. A novelist (LA Breakdown) and journalist, he has received a Pushcart Prize, a Katherine Anne Porter Prize, and an NEA Fiction Fellowship, and is a recipient of the UCLA Extension Outstanding Instructor Award in Creative Writing.

In the early '70s, the dazzling Argentine fabulist, Jorge Luis Borges, came to UCLA for a lecture and discussion. When the talk was finished and the audience was called on, a young man shot to his feet. He was a very angry Brown Beret. He didn't have a question, but a statement. What he shouted at Borges, roughly was this: "Your time is over. Nobody in South America reads you. Nobody here. Nobody cares what you write!" The audience was deathly quiet. Borges, frail and blind, spoke in Spanish for the first time that evening. He said, "Yo no soy Catolico. Yo no soy Communista. Yo soy escritor." I am not a Catholic. I am not a Communist. I am a writer. The young man looked at him, baffled. The audience thought it over and rose to their feet, cheering. Borges' response pretty much sums up the situation for me.

Our Students Say it Best! "I thought instructor Lou Mathews offered thorough comments on my stories and advanced me as a writer.  He has an obvious love for the materials and perfect taste in writers to choose as our role models.  He’s been very inspiring.” -- Writers' Program student

To watch a video of Lou reading from his work at the 2011 Writers’ Program Publication Party, click here.