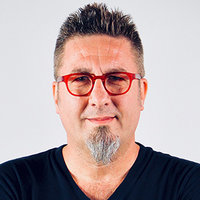 Maurizio “Otto” De Togni teaches courses in ProTools and Apple Logic. He has almost 30 years of experience as a musician, composer, arranger, programmer, and audio technologist. He has worked with artists like Franco Battiato, Zucchero Fornaciari, Roberto Cacciapaglia and Nikka Costa, Samantha Fox Sandy Marton, Den Harrow, as well as on commercials for Heineken, Subaru, Campari, Lindt; and TV award-winnings programs (worked on more than 1000 episodes) with major Italian TV networks (Mediaset©, RaiTV© …). With almost 60 certifications (Avid Pro Tools Certified Instructor Pro Tools Expert & Apple Logic Pro X Certified Trainer) and using both Softwares (Notator Emagic & Digidesign Sound Tools) since their beginnings in the late 80’s, OttO has also taught Worldwide hundreds of classes/thousands of students, at the Academy of Entertainment Arts and Professions at Teatro alla Scala & Espero (Milan), Soho Editors (London), Future Media Concepts (Stanford University), Musicians Institute, the Grammy Museum and UCLA Extension in Los Angeles. His clients include Paramount Pictures, James Valentine & Jesse Carmichael (Maroon 5), Mike Posner and the John Lennon Educational Tour Bus. He has written extensively for Macworld magazine; and is a member of the Italian (SIAE) Society of Authors and Publishers & (NARAS – Grammy) the National Academy of Recording Arts and Sciences. Among OttO’s work as Music Editor/Supervisor, you’ll also find a multi-awards winning Documentary “The Jumper Mayback Story”, an inspiring story of how one man finds the courage to fight for equality. He loves to travel with his lovely family and he’s a big fan of great food. He’s the producer and publisher along with his wife of the “A Queen in the Kitchen” book and YouTube/Vimeo Channel. He’s the recipient of the 2015, 2016 & 2017 Instructor of the Year at Musicians Institute (School of Industry & Audio Engineering), as well as the “2012 Outstanding Instructors” award at University of California Los Angeles (UCLA ext.) in entertainment studies and performing arts.