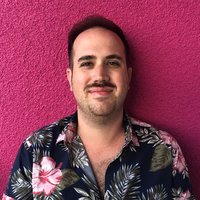 writer and editor based in Los Angeles. Mr. O’Keeffe’s work has appeared in The Atlantic, The Advocate, Mic, INTO, The Daily Beast, Texas Monthly, and more. He is a member of the Television Critics Association and the Los Angeles Online Film Critics Society where he writes analysis and criticism of film and television, largely through a queer lens.

A nonfiction writer's ultimate goal is to tell a story. In almost all cases — memoir and personal essay being the significant exceptions — those stories belong to other people. Whether a writer is reporting a story in a feature, painting a verbal picture of a person in a profile, or commenting on a story in criticism or an essay, their goal is to tell another person's story with grace, passion, and humility. The storyteller is not the subject, but the conduit — the person who can say what the subject themselves cannot, through expressive prose and effective narration. As an instructor, it is my role to help build a writer's skills, and bring out their voice so that they may use it to tell others' tales.