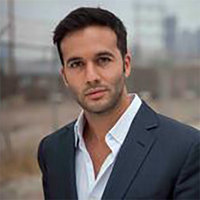 Award-winning director and writer whose credits include the shorts Inside the Box, La Viuda (The Widow) for which he won the DGA Student Film Award, and Ida y Vuelta (Round Trip) which was a finalist for a student Academy Award. He also directed the feature Stealing Summers. Mr. Martin-Porras was picked as one of the top ten Spanish filmmakers on the rise by Variety magazine in 2013, and was nominated for a Goya Award in 2016.

Instructor Schedule
The Craft of the Director
Fall 2021