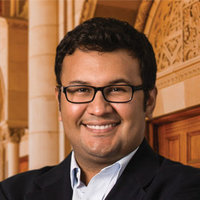 A bilingual actor whose credits include co-starring roles in TV shows such as Carol’s Second Act (CBS), Indebted (NBC), One Day at a Time (Netflix), Grace and Frankie (Netflix), Alone Together (Freeform), American Crime (ABC), Training Day (CBS), No Tomorrow (The CW), and Jimmy Kimmel Live (ABC). Mr. González has also appeared in national commercials for Sonic, Ride Aid, Lowes, Nopalina, and has performed in regional theaters across the country. He is an alumnus of the Improvisation Conservatory at The Second City Chicago, where he is a former performer/writer in the outreach/diversity ensemble. He is a proud member of SAG-AFTRA, AEA, and the Television Academy of Arts and Sciences.